From March 8th to  11th, 2018 the Southern California Linux Expo (SCaLE) took place in beautiful Pasadena for the third year in a row, previous edition were held in hotels near LAX. This was the 16th edition of the conference -hence the #Scale16x hashtag that flooded social media those days- and my personal 8th.

I’ve been saying it for a while now that I think that the conference is just getting better by every year, but this year I heard several comments that this is one of the best and most important community driven conferences in the world. Rough estimations tell that there were around 3,000 attendees this year.

As a long time tradition now, the Fedora community held some activities in the conference, as well as a booth in the exhibition floor. This year, I had the privilege and pleasure of  promoting Fedora, answer question from people that showed interest in  (or are already users of) Fedora or simply saluting people that stopped by. I have to say that it pleasantly surprised me the growing number of spanish-speaking people that attended this year. I was accompanied in booth duty with long time Fedora contributors -but above all great Friends- Perry Rivera, Scott Williams and my newest Fedora friend Michael Singh. Unofficialy, but always willing to help, RedHat’s Tom ‘Spot’ Callaway was also supporting our booth and we always appreciate it and thank him for his work. 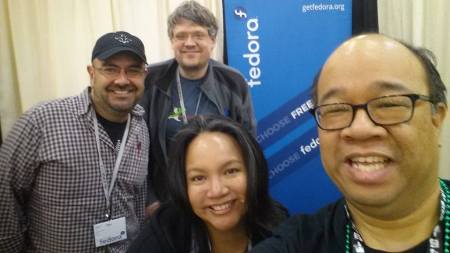 Speaking of Red Hat -if you were unaware, it is the company that sponsors our community- they also had a booth and some talks in the conference, so it was a great pleasure to say hello to old RedHatters Jen Madriaga, Karsten Quaid and Brian Proffit, just to mention some of the ones that I know for a while now.

By the way, thank you Jen for the photo 🙂

Thank you also to my new friend Jennifer, who took this picture randomly and later that day I casually met her, as she was with a long time Scale attending group from Tijuana. 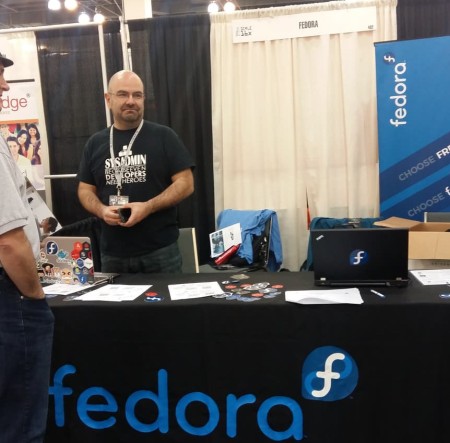 Also, it is always satisfactory to say hello to contributors and friends from  other RedHat sponsored communities like opensource.com.

There was for sure a pretty interesting schedule of talks and events for the conference, it can be reviewed here.  Unfortunatelly, we had few time to attend a lot of talks due to booth duty -not complaining about it though- but we still manage to attend a few that would not interfere with it. Of course, we couldn’t have missed RedHat’s Langdon White talk titled «Fedora Modularity: Lessons Learned, Next Steps & Demo«.  Langdon presented a new modular model for distributing applications that is getting maturity and will be available in future Fedora releases. After the talk, later that night we had a small discussion group with people interested in the subject. 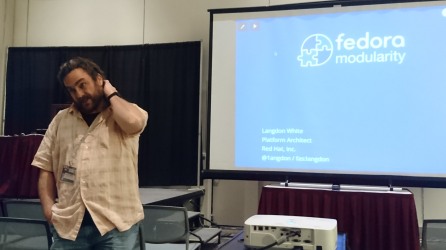 The full presentation can be reviewed in the following link, around 5:08:00

Personally, I also had the opportunity to attend a Kubernetes Bird of Feathers with a bunch of interesting guys from top kubernetes contributing companies like Google, RedHat and Samsung. It was for sure a delightful and enricher experience.

Words never seem to be enough, SCaLE is such an important event for Free and Open Source Software and communities. I am so glad I had a chance to participate and I cannot stress enough how happy and proud I’m to be part of Fedora and I can’t wait for upcoming editions of the conference.

This entry was posted on sábado, 24 de marzo de 2018 at 7:56 pm and is filed under Uncategorized. You can follow any responses to this entry through the RSS 2.0 feed. You can leave a response, or trackback from your own site.

2 Responses to Another year, another great Linux conference – Scale16x